The Staggering Levels of Real “Inflation-Adjusted” Gold and Silver Prices

Many will be familiar with inflation adjustments that are applied to GDP, wages, interest rates, security returns, and of course consumer prices and asset prices. The resulting data is usually referred to as “real (inflation-adjusted)” data.

Economic data is adjusted for inflation so that data measured over time takes into account the inflation rate over that time period, and removes the distortive effect that this inflation would have on comparisons of data points over time. Inflation is measured by calculating the rate of change in the prices of a basket of goods and services, such as a consumer price index (CPI) or a cost of living index (COLI).

Central banks have a vested interest in a low inflation rate as it makes the purchasing power of their fiat currencies looks less weak than they actually may be, while hiding negative interest rates during low interest rate environments.

Is the US, the most widely used calculation of inflation is the US government’s set of consumer price indices (CPI) calculated by the US Bureau of Labor Statistics (BLS). However, these indices are widely lambasted as being a fiction in their construction if not an outright lie, the motivation of the BLS being to understate inflation for their political paymasters for the reasons mentioned above.

This is why alternative inflation rate providers such as ShadowStats have emerged to counteract the government version of inflation and to provide a more truthful and factual alternative.

For example, the Bureau of Labor Statistics latest release, published on 13 January 2021, will tell you that annual inflation based on its flagship Consumer Price Index for All Urban Consumers (CPI-U) for 2020 was a mere 1.4%.

The difference is massive and striking. And when these differences between the increasingly US government massaged CPI numbers and the previous 1980 methodology are compounded over the years, the differences in inflation rates and inflation adjustments is staggering.

ShadowStats explains that its Alternate CPI:

“reflects the CPI as if it were calculated using the methodologies in place in 1980.

In general terms, methodological shifts in government reporting have depressed reported inflation, moving the concept of the CPI away from being a measure of the cost of living needed to maintain a constant standard of living.”

In short, ShadowStats says in an article explaining the Bureau of Labor Statistics hoax, that:

“the Consumer Price Index has been reconfigured since the early-1980s so as to understate inflation versus common experience”.

Accurate inflation figures are always important but arguably more so right now in the current global environment of financial repression imposed by central banks and governments via unlimited global quantitative easing, economic stimulus in the multi-trillions of dollars, rapid growth in the global money supply, and low to negative interest rates.

Given that unlimited money printing and fiat currency destruction ultimately lead to high inflation and possibly hyperinflation, there is a need for a range of functioning alarm bells to signal the onset of these phenomena.

While rising prices in general commodities, raw materials and Bitcoin seem to be doing their job right as alarm bells signaling higher inflationary expectations and a race to the bottom in fiat currency values, central banks have for now managed to disable the traditional inflation barometer in the form of a rising US dollar gold and silver prices. Or so they think.

But as with all manipulations and interventions, by subduing inflation data, central banks and their government schemers have only made the future upward moves in monetary metals prices all the more spectacular when the paper gold hoax finally comes to an end. They governments and central bankers have also left all the evidence for anyone to see in the form of real (inflation-adjusted) gold and silver prices.

Central to inflation-adjusted gold price data series is the legendary US dollar gold price move of the late 1970s and  into January 1980, a move which culminated on 21 January 1980 with the gold price trading at the $850 level, a level which was to become a multi-year peak for the nominal gold price.

Although now 41 years ago, that $850 level is still critical since, when adjusted for inflation (by all inflation measures), it is still appearing as the peak for real (inflation-adjusted) gold prices.

The first chart below is a long term US dollar gold price chart since 1700, inflation-adjusted by the US Consumer Price Index (CPI-U) from the Bureau of Labor Statistics.

You can see that based on this CPI adjustment, that the all time real high of the US dollar gold price was in January 1980 at US $ 3045 per troy ounce.

The next chart is the same data, but zoomed in from 1950 to December 2020.  The main takeaway from these charts is that even adjusting by the spurious and deliberately understated US Government inflation statistics, the US dollar gold price (currently at US$ 1830 at the time of writing) is still 66.4% below its real CPI adjusted all time high. 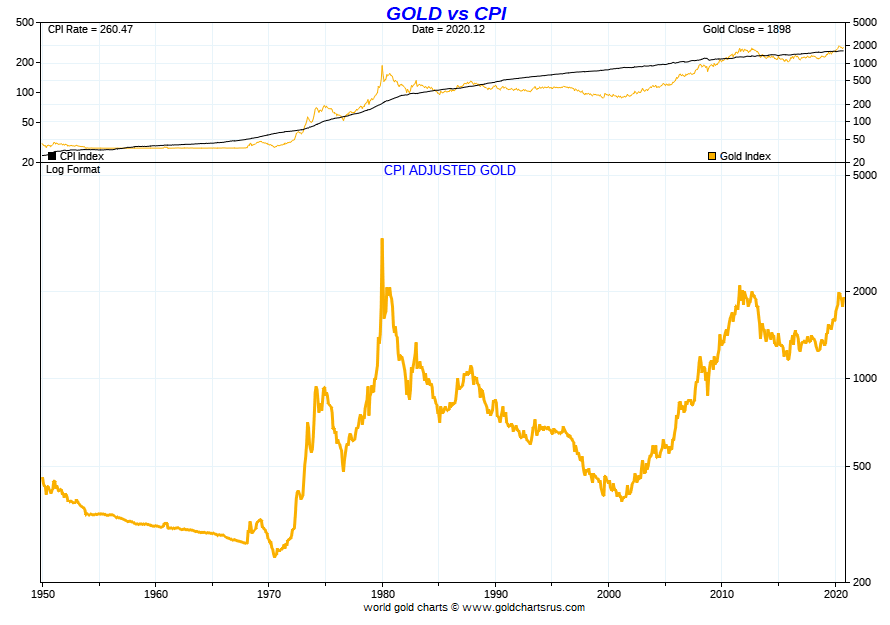 Gold prices, inflation adjusted by CPI, from 1950 to end of December 2020. Source: www.GoldChartsRUs.com

Turning to silver, there have been two well-known historical peaks in the US silver price, the first at $49.45 per troy ounce on 18 January 1980 (which was connected to the Hunt Brothers’ trading) and the second just less than 10 years ago on 28 April 2011, when the price spiked at $49.20. Although in nominal terms these two peaks were of similar magnitudes, one was 31 years before the other, and so the inflation adjustment for the 1980 peak price will be larger than for the 2011 price.

Looking at the long term US dollar silver price chart since 1700, inflation-adjusted by the Bureau of Labor Statistics’ Consumer Price Index (CPI-U), we can see that, similar to gold, the peak in the silver price occurred at the early 1980 high, and that the CPI inflation-adjusted all time high for silver when using the deliberately subdued CPI adjuster was an impressive US$ 140.85, which would be an incredible 469% above the current silver price of US$ 24.75 (at the time of writing).

And now for something that will blow your mind. Moving beyond the manipulated twilight zone of inflation data churned out by the US Bureau of Labor Statistics, let’s look at gold and silver prices adjusted by the ShadowStats Alternate CPI (1980 Base).

As a reminder, this Alternate CPI from ShadowStats is an estimate of inflation up until today as if it were calculated using the methodologies that the Bureau of Labor Statistics used in 1980.

The first chart above is a long term US dollar gold price chart since 1700, inflation-adjusted by the ShadowStats Alternate CPI. Spectacularly, the January 1980 high in the gold price, when adjusted for subsequent inflation is US$ 20,900.24 per troy ounce. Yes, you read that correctly. Nearly US$ 21,000.

In other words, in real terms, the current US gold price of US$ 1830 is massively below gold’s all time high, in fact, 1042% below it’s real all time high.

The zoomed in version of this chart from 1950 onwards more clearly shows this massive inflation adjusted peak of nearly US $21,000, and also illustrates the political crime of the Bureau of Labor Statistics in subduing and depressing inflation data since 1980 and destroying the traditional inflationary price signals of gold.

This real inflation-adjusted all time high is 3800% above the current US dollar silver price.

Nominal gold and silver prices in US dollars are currently far below their real (inflation-adjusted) all time highs. And this is even true when using the corrupted, artificial and politicized CPI data of the US Government’s Bureau of Labor Statistics. Even a believer in the official CPI data must question why gold and silver prices have not kept pace with officially published US Government inflation statistics. As the US hurtles towards destroying the US dollar with ever larger banana republic policies, how long more can the paper gold and silver market charade be kept going?

Policymakers have disabled the gold fire alarm (for now) but not the BTC fire alarm. This may put them in an uncomfortable position sooner than they think.

But when using the earlier Bureau of labor Statistics methodology of 1980, as reconstructed by the ShadowStats Alternative CPI-U, the real (inflation-adjusted) gold and silver prices are truly staggering, with all time 1980 highs of nearly US$ 21,000 and US$ 1000 respectively. Everyone with an interest in the free functioning of markets must begin to sit up and question what is going on.

Why has the world allowed a gold and silver price discovery process to evolve that keeps the prices of gold and silver subdued, that has imposed a gigantic inverted paper gold and silver market on top of the real market that is controlled and manipulated by the LBMA banks and their central bank agents, chiefly the Bank of England and Bank for International Settlements (BIS).

Anyone interested in the real value of precious metals must come together to devise a plan to finally break these artificial constraints, thereby allowing gold and silver prices to finally rise to their natural levels. The time is now.