The second half of 2016 saw announcements by three exchange providers for plans to compete in the London Gold Market through offerings of exchange-traded London gold futures contracts.

First off the mark was the London Metal Exchange (LME) in conjunction with the World Gold Council with a planned platform called LMEprecious. There were rumblings of this initiative in the London financial media from as early as January 2015,  but concrete details for the actual platform were only announced on 9 August 2016. See LME press release “World Gold Council, LME and key market participants to launch LMEprecious.” The LME plans to call its gold futures contract LME Gold. There will also be an “LME Silver". Each is a suite of contracts of varying lengths including a daily futures (spot settlement) contract. See also BullionStar blog “The Charade Continues – London Gold and Silver Markets set for even more paper trading" from August 2016 which took a first look at the LMEprecious suite.

Two months after the LME announcement, during the annual conference of the London Bullion Market Association (LBMA), Intercontinental Exchange (ICE) announced on 17 October that it too planned the launch of a gold futures contract in the London market. See Bullion Desk’s “ICE to launch gold futures in 2017, competition in gold market grows” as well as the ICE press release. The ICE contract is named “Gold Daily Futures" and resides on the ICE Futures US platform. It too is a daily futures contract.

Not to be outdone, the CME Group then followed suit on 1 November 2016 and it too announced plans for a “London Spot Gold Futures contract" as well as a “London Spot Silver futures contract". See CME press release “CME Group Announces New Precious Metals Spot Spread” from 1 November 2016, and “CME to launch London spot gold, silver futures for spot spread” from the Bullion Desk, 1 November 2016. The CME contract was to trade on COMEX (Globex and Clearport) as a daily futures contract, and was devised so as to offer traders a spot spread between COMEX and London OTC Spot gold. 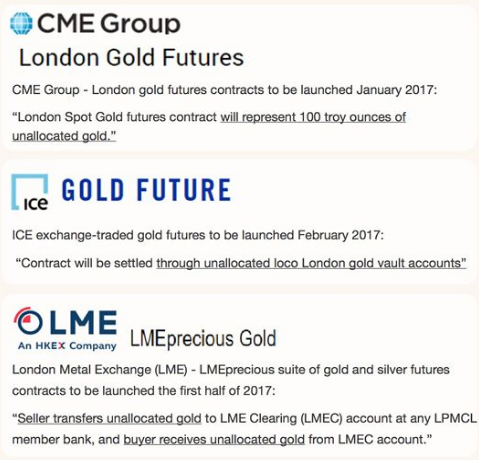 Why the update? Over the 2 weeks, there have been a number of developments surrounding these 3 contracts. The CME and ICE gold futures contracts have both been launched, and additionally, LME has provided more clarity around the launch date of its offering.

On 25 January, I took a look at the CME website to see what the status of the CME gold futures contract might be. Strangely, the contract itself was defined on the CME website (with a code of GSP) but it had no trading volume. From the website, it was not clear when the contract actually launched, but it looked to be sometime during the last week of January.

On 25 January, I also sent a short email to CME asking:

“Has the London Spot Gold contract started trading yet?

It doesn’t look like it has, even though the contract is defined on your website. Could CME confirm when it will start trading?"

Next day on 26 January, I received this response from the CME:

“Thank you for reaching out to the CME Group with your query.  The London Spot Gold and Silver products are available to trade but at this time no trades have been made in the listed contract months."

Fast forward to end-of-day 7 February. From the CME website, I still cannot see that there have been any trades in this gold futures since it was launched. The volumes are all zero. The same applies to the London Spot Silver futures contract (code SSP).

Next up the ICE gold futures contract (AUD). Upon checking the ICE website under section “Products",  the new ICE Gold Daily Futures contract has been defined, and the description states “The Daily Gold Futures contract will begin trading on trade date Monday, January 30, 2017“.

Turning to the ICE reporting section of the website for futures products, and selecting the end of day ICE Futures US report page, and then selecting the reports for AUD, there are 6 daily reports available for download, namely, from 30 and 31 January, and 1, 2, 3 and 6 February. Again, looking at each of these reports, there are varying prices specified in the reports but there are no trading volumes. All of the volumes are zero.

Therefore, as far as the CME and ICE websites show, both of these new gold futures contracts have been launched and are available to trade, but there hasn’t been a single trade in either of the contracts. Not a very good start to what was trumpeted and cheer-led as a new dawn for the London Gold Market by outlets such as Bloomberg with the article “Finance Titans Face Off Over $5 Trillion London Gold Market“.

Finally, possibly so as not to be forgotten while its rivals were launching their London gold futures offerings, the LME on Friday 3 February announced in a general LME and LME Clear update memo that the planned launch date of its LMEprecious platform is now going to be Monday 5 June, i.e. 4 months from now.

As a reminder, the LMEprecious contracts will be supported by a group of market maker investment banks, namely Goldman Sachs,Morgan Stanley, Société Générale, Natixis and ICBC Standard Bank.

It’s also important to remember that all 3 of these gold futures contract product sets are for the trading of unallocated gold, (i.e. claims on a bullion bank for gold, aka synthetic / fictional gold). All 3 contracts claim to be physically-settled but this is essentially a play on words, because in the world of the London Gold Market, physically-settled does not mean physically-settled in the way any normal person would define it. LBMA physically-settled just means passing unallocated balances around, a.k.a. pass the parcel. To wit:

And for LMEprecious, settlement will be:

The lack of coverage of the new CME and ICE London gold futures contracts is also quite unusual. Have the London financial media already forgotten about them? According to Reuters it would seem so. On 22 January, Reuters published an article titled “LME’s pitch for share of gold market faces bumpy ride" which exclusively questioned whether the LME gold contract would be a success, while not even mentioning the CME and ICE contracts. Given that 22 January was right before the CME and ICE contracts were about to be launched, this is quite bizarre. Presumably Bloomberg will come to the rescue of its ‘financial titans’ heros, and will write glowing tributes about the new contracts, but this will be tricky given the zero trade volumes. We await with bated breath.