El Salvador’s gold reserves, the BIS, and the bullion banks

According to a Reuters report from 24 April, the central bank of El Salvador, Banco Central de Reserva de El Salvador (BCR), sold approximately 80% of its gold reserves during March 2015. This sale comprised 5.412 tons of gold and raised $206 million for the Bank.

Reuters initiated its story based on updates to the International Monetary Fund’s gold reserve data, which this month was updated on 24 April. Each month, the IMF updates its International Financial Statistics dataset with economic data (on a one to two month lag) including country gold reserve data reported to it by member countries.

However, the Reuters story was very brief and failed to explain any of the details about El Salvador’s gold or the March gold sales. Therefore, to correct this situation, the full story is explained below.

The IMF elibrary web site is the entry point for retrieving monthly country gold reserve data (by volume in fine troy ounces) for any IMF member country. Note that on the IMF’s site, gold reserve data is part of the International Financial Statistics (IFS) dataset and not part of the International Reserves dataset. The IFS dataset was subscription-based until January 2015, after which the IMF made a number of datasets, including IFS, free to access.

The IMF’s elibrary platform is located at http://elibrary-data.imf.org/DataExplorer.aspx, but this platform is being phased out soon since the IMF has launched a replacement platform called data.imf.org which will contain the same data including free IFS data.

The Bank for International Settlements, Barclays and Scotia

The most recent BCR publication (in Spanish) that lists the central bank’s gold reserves is the 30th September 2014 edition of the ‘Statement of Assets backing the Liquidity Reserve’, or ‘Estado de los Activos que respaldan la Reserva de Liquidez’ Sept 2014. This ‘statement’ was audited by the local San Salvador office of KPMG .

Section 7 of this statement addresses the BCR’s gold deposits (Depósitos en Oro) and is quite detailed in the information that it provides. See screenshot below:

As of 30th September 2014, the BCR claimed a gold holding of 223,113.213 troy ounces. Exactly 85% of this gold holding (189,646 ozs) was said to be held as deposits of physical gold (Depósitos de oro físico) with the Bank for International Settlements (BIS). The BIS offers gold “safekeeping and settlements facilities" that are “available loco London, Berne or New York“, i.e. the BIS maintains gold accounts in three locations, so El Salvador’s gold could have been held with the BIS in any of these three locations.

The remainder of the gold holdings comprised 31 day time deposits in gold (Depósitos a plazo en oro) placed with two bullion banks, and derivative coverage (Derivado de Cobertura) with the BIS in the form of two put options entered into in March 2014.

The time deposits in gold were placed in equal sizes with Barclays Bank and the Bank of Nova Scotia. Each of these time deposits represented 7.5% of El Salvador’s gold holdings, specifically 16,733 ozs with Barclays and  16,734 ozs with Scotia, and 15% in total. The combined deposits also totalled 33,467 ozs, just over 1 ton. Interest on gold deposits is usually paid in gold that accrues and is added to the outstanding deposit total, so this amount in excess of 1 ton may represent interest payable to the BCR by the bullion banks.

Note that both Barclays and Scotia were two of the member banks of the recently defunct London Gold Market Fixing Company which managed the daily London gold fixings, and the two banks are also now two of the seven participants in the new LBMA Gold Price auction which recently replaced the gold fixings. Barclays and Scotia are also two of the six member bullion clearing banks which constitute London Precious Metals Clearing Ltd (LPMCL).

There was also a residual line item under the BCR’s time deposits in gold attributed to a third bullion bank, Standard Chartered. Finally, the BIS derivatives coverage line item accounted for 2,180 ozs.

At the stated valuation price of $1,216.50 per ounce, the above totals add up to 225,293 ozs of gold, but subtracting the derivatives line item of 2,180 ozs yields 223,113 ozs, which is the total gold holding that the BCR claims to hold. The gold representing the derivatives (put options explained below) line item seems to represent a loss on the puts expressed in gold that the BCR makes an adjustment for by subtracting it from its ‘total’ gold holding, hence it reported a gold holding of 223,113 ozs. 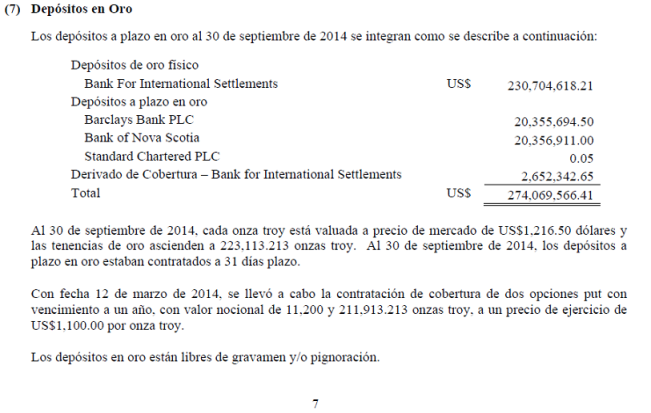 The last notes to the above section 7 state that:

The gold deposits are free of charge and / or pledge."

Going back another three months to June 2014, the 30 June 2014 edition of the BCR’s ‘Statement of Assets backing the Liquidity Reserve’, or ‘Estado de los Activos que respaldan la Reserva de Liquidez’ June 2014, shows very similar information to September 2014, with an identical amount of gold placed with the BIS at 189,646 ozs.

However, on 30 June the BCR had an active time deposit in gold placed with Standard Chartered as well as with Barclays and Scotia, and so was using three bullion banks for placing its gold deposits.

Using a valuation price of $1,315 per troy ounce, the June report shows that Barclays held a time deposit in gold for the BCR of 16,733 ozs, Scotia held a deposit of 8,467 ozs and Standard Chartered held a deposit of 8,267 ozs. These deposits also rolled over with a one month maturity.

The gold deposit with Barclays in June 2014 is identical to that of September 2014, so it was just being renewed by the BCR every month and rolling over with Barclays. Note that the Scotia and StanChar deposits of 8,267 ozs and 8,467 ozs respectively, add up to 16,734 ozs, so between June and September, these two deposits were combined at some point when they matured and were then placed together with Scotia. 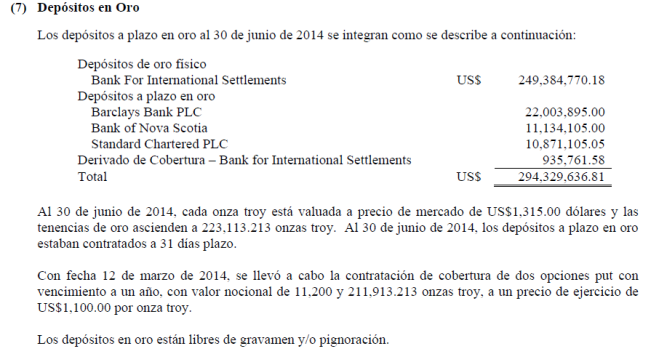 It’s important to grasp what these gold deposits with bullion banks are. This is merely gold lending by a central bank which has lent this gold out to LBMA bullion banks at very low deposit rates of maybe 0.5% – 1.00%. The LBMA bullion banks, at the time the lending first occurred, obtained the physical gold and immediately sold it.

Lots of central banks engage in this activity, they just don’t report it in as much detail as, for example, El Salvador or Bolivia. The Austrian federal auditors recently published a report which showed that Austria’s central bank, the OeNB, was actively engaging in gold lending with multiple bullion banks, with up to 10 counter-parties in 2009. See here.

Selling its Gold did not make sense for El Salvador

In its 24 April story, Reuters reported from San Salvador that a central bank of El Salvador  official had said that the gold sales were to “diversify risk and take advantage of the metal’s appreciation”, as well as to protect the Bank’s reserve portfolio “against market volatility”. This explanation doesn’t make a lot of sense especially since the put options were out of the money in March 2015.

Firstly, the gold price has not appreciated very much recently, and in US dollar terms it has fallen notably since September 2011. El Salvador’s gold holdings did not change at all over 2011-2014 and their value went down, not up. So, at this time, the reference to the “metal’s appreciation" is bogus, since even if the cost price was substantially lower, a far better time to sell would have been in 2011-2012.

Secondly, gold as a reserve asset in a central bank reserve portfolio is held precisely because it provides diversification and can act as an inflation hedge, currency hedge and also represents a reserve asset or war chest of last resort. In the World Gold Council’s latest ‘World_Official_Gold_Holdings_as_of_April2015_IFS’ report from early April, when El Salvador was listed as holding 6.8 tons of gold, this represented 9.9% of the BCR’s total reserves.

Emerging market central banks have been actively increasing their gold reserves in recent years, so as to increase the gold percentage in their reserves to something approaching 10%. Since El Salvador had an enviable ratio of nearly 10% of gold to total reserves that many emerging central banks are striving to reach, it does not make any sense as to why the BCR suddenly turned around and ruined this ratio, by selling nearly four-fifths of its gold. The BCR’s gold to total reserves ratio is now a miniscule 2% of its total reserve portfolio. There may therefore have been other considerations at play between El Salvador and the BIS such as the BIS suggesting the sale. 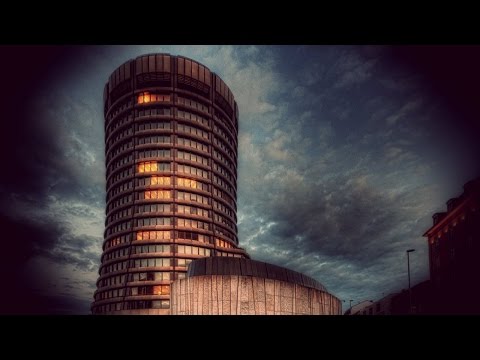 So, which gold did El Salvador sell?

Since the Salvadoreans had 189,646 ozs on deposit with the BIS and needed to sell 179,000 ozs, the gold sold was most definitely sold to the BIS or to another party with the BIS acting as agent. On its website, under ‘foreign exchange and gold services", the BIS states that it offers “purchases and sales of gold: spot, outright, swap or options“.

It would not make sense to sell some or all of the time deposits that are out with the bullion banks such as Barclays and Scotia, since a large chunk of the BCR gold at the BIS would have to be sold also. It would be far easier to just deal with one set of transactions at the BIS. And additionally, the bullion banks do not have El Salvador’s gold, they would need to use their own stocks or go out into the market to buy gold in order to repay the BCR.

The case of the El Salvador gold sales demonstrates that central banks can and do use the gold depositing facilities of the Bank for International Settlements, and also the gold lending services of LBMA commercial bullion banks such as Barclays, the Bank of Scotia and Standard Chartered amongst many others. The case of El Salvador also shows that central banks actively use derivatives such as put options within the management of the gold component of their reserve portfolios.

It’s also a shame that neither Reuters nor any other financial news organisation sees fit to write anything of substance about El Salvador or other central banks and the real workings of the interbank and BIS gold market given that it’s not that difficult to produce an article such as the above within a few hours of research and writing.