While many people will be familiar with the term ‘London Gold Market’, most will have little knowledge about its inner workings, especially when it comes to how, and to what extent, the world’s central banks trade and lend gold in London through the Bank of England and the LBMA bullion banks.

And that’s the way they like to keep it. Never in the history of financial markets has there been a trading venue that has been more opaque, more secretive, and more impenetrable than the London Gold Market. Especially when it comes to central bank gold operations.

That the London Gold Market (meaning the wholesale market) is controlled by a cabal of LBMA bullion banks is widely known, but what’s not so well understood is that within the core of this haze sits the Bank of England, overseeing, coordinating and facilitating the central banks of the world to conduct their gold transactions, including the ultra-secretive gold lending and gold swap transactions.

It was for this reason that the famous ‘Another’ said that:

“If you are searching for facts you will find them, but the items you find will not be true! Did you think that the high-powered world of the LBMA would operate in a fishbowl for all to see?

In this quote, ‘Another’ was specifically talking about central banks, for he continued:

Would the world’s central banks really have kept gold this long if they only valued it at it’s ongoing commodity price?”

The Bank of England, The BIS, and The LBMA

Why I highlight this here is that last week an unusual and surprising article was published by Bloomberg titled “Bank of England gold commands high premium, signals Central Bank buying”.

The article, quoting anonymous ‘bullion traders’, claimed that gold bars stored in the Bank of England’s gold vaults in London had, during May, been selling ‘for unusually high premiums’ of between 30 – 40 US cents per troy ounce, and as high as 50 US cents, when usually these premiums would, according to Bloomberg, be between 0 – 20 US cents. The premiums on the BoE gold, said Bloomberg sources, had also diverged on the upside compared to premiums on similar gold bars held in commercial vaults in London, such as the JP Morgan vault in the City of London (which is under Carmelite St / John Carpenter St near Inner Temple).

The punchline of Bloomberg’s article, was that “these premiums are at least in part being driven by buying from the Bank for International Settlements [BIS], which regularly trades the metal on behalf of the world’s central banks’.

This Bloomberg factoid was again attributed to an anonymous source, specifically “a person with direct knowledge,…asking not to be identified because the information isn’t public.”

Another anonymous person told Bloomberg that “the BIS bought as much as 1 million ounces of BOE metal from various commercial banks at a premium of 30 to 40 cents recently”.

All of which led Bloomberg to conclude that “central banks may be back in the market buying”. 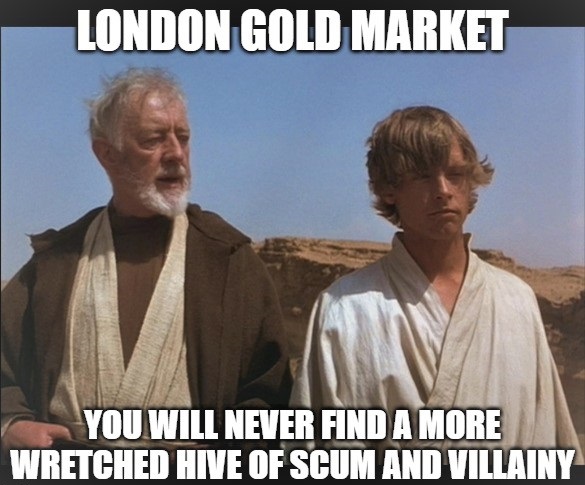 The trouble with all of this is that none of it can be verified or confirmed since all of the sources Bloomberg quotes are anonymous. The icing on the cake was that both the BIS and Bank of England declined to comment, with Bloomberg stating that:

So with the alleged protagonists declining to comment, then why did commercial bullion traders with ‘direct knowledge’ decide to comment about non-public information, while at the same time asking not to be identified? And who first approached Bloomberg? Was this article planted by the bullion banks and/or Bank of England / BIS into the media via Bloomberg? And if so to what end?

While we know that gold prices are derived not from physical gold demand but from trading of unallocated synthetic gold credit in London and trading of gold futures on COMEX, Bloomberg continues to push the establishment line that central bank activities in the gold market help the gold price, as it wrapped up its article with the unsubstantiated claim that “central banks helped underpin gains in gold prices for most of the last decade”.

But not a word about the secretive world of central bank gold lending at the Bank of England, which actually does the opposite and expands gold supply by lending gold to LBMA bullion banks, while pretending the central banks still hold it, and in this way keeps the gold price from rising. In the euphemistic wording of the Bank of England and LBMA, this gold lending ‘provides liquidity to the London gold market’, which in other words means creates supply which does not exist.

All we know about the BIS’ gold operations is that the BIS maintains gold accounts in London (Bank of England), New York (NY Fed), and Berne, Switzerland (Swiss National Bank), and through these accounts offers its central bank clients “Gold location exchange, safekeeping and settlement: loco London, Berne or New York” as well as “Gold purchases and sales: spot, outright forwards, swaps and options”.

And the guardians of this information in the London gold market are the Bank of England, the BIS, and the LBMA bullion banks.

At times the LBMA will pay lip service to transparency about central bank gold operations, for example in Issue 91 of its Alchemist publication (October 2018), in which an article appeared titled “Removing the Cloak from Central Bank Gold Operations”.

However, in typical LBMA style, this article did nothing to remove any cloak of secrecy, and was so general that it failed (by design) to reveal anything previously unknown about central bank gold operations. Another example is the LBMA’s claimed proposal of putting the identity of gold bars and their transactions on the blockchain. Gimme a break.

In short, the LBMA and Bank of England may claim transparency about the London gold market, but in the reality, the opposite is true.

A case in point is the recent letter from the LBMA to the Bank of England’s Prudential Regulation Authority (PRA), about the treatment of synthetic ‘unallocated’ gold credit under bank funding and liquidity rules being proposed by the regulatory Basel III (Basel Standards).

Before your eyes glaze over, we won’t look at this complex topic here, only to highlight what the letter, which is titled “The Impact of the NSFR on the Precious Metals Market”, has to say about central banks in the context of the LBMA trying to protect the mirage of the unallocated paper market and its paper gold clearing system (London Precious Metals Clearing Limited – LPMCL)

In the LBMA document, we learn that:

One of the Basel proposals (a proposed 85% on Required Stable Funding (RSF) calculation) would, among other things:

In typical distractive speak, LBMA uses a spurious argument that central banks care about gold storage costs (hint – they don’t) when in fact the real concern is that gold deposits, gold lending and gold swaps provide a ready source of physical gold to the bullion banks to feed into the market.

Curtailed central bank operations, says the LBMA document would “fundamentally alter the structure and attractiveness” of the unallocated gold market.

What the NSFR letter does not say is that often these gold loans are rolled over for years among the commercial banks, and the physical gold is never paid back to the central banks but still kept on their books. See the BullionStar article “Bullion Banks pass the parcel on El Salvador’s gold reserves” for the background on how the LBMA bullion banks constantly pass around the gold loans of central banks, and never have to pay back the gold.

This World Gold Council is truly strange, an organization which comprises the largest gold mining companies in the world, but which (until evidence proves otherwise) never champions the physical gold market but is merely a lackey in compliance with the LBMA bullion banks in their quest to perpetuate the fractional paper gold market in London.

In fact, the document which appears on the LBMA website ‘NSFR-PRA-Letter-final_signed-20210504.pdf’ was created on 30 April 2021, and last modified on 4 May 2021. The author of the pdf is listed as “Emmy Richardson”, who is the LBMA Office Coordinator.

And so, where do you look if you want to know about central bank gold transactions and gold lending operations in the London market? The Bank of England website? The BIS website? The LBMA website? Some incisive Bloomberg investigative articles? Wrong, wrong and wrong again.

The correct answer is nowhere, and that is precisely because the topic of central bank gold operations and gold lending are closely guarded secrets, never documented, never publicized, and never investigated by the financial media. In fact, never has a financial market been less investigated by the mainstream media than the London gold market.

This is why the gold bar weight lists of central banks are never published, as their publication would reveal that much of their gold is not sitting in unencumbered storage in London, but has long been lent out. This is why the confidential IMF report in 1999 showed that central bank officials from the Bank for International Settlements, the European Central Bank, the Bank of England, the German Bundesbank, the Bank of France, and other European central banks"

“indicated that they considered information on gold loans and swaps to be highly market-sensitive, in view of the limited number of participants in such transactions.“

This is because market information is power, and lack of information allows the incumbent participants (the central banks, the Bank of England, the BIS and the LBMA bullion banks) to abuse that power at the expense of the entire global gold market. To paraphrase Winston Churchill’s famous quote:

“I cannot forecast to you the action of the London gold market. It is a riddle, wrapped in a mystery, inside an enigma; but perhaps there is a key. That key is control of the gold price.”