Precious Metals Markets: China vs US

In anticipation to the launch of the Shanghai Gold Exchange international board, that presumably will start shifting gold pricing power from West to East, in this post we'll examine the historical trading volumes of the Shanghai Gold Exchange (SGE), the Shanghai Futures Exchange (SHFE) and the COMEX. By charting the weekly volumes we get a clear view of the size of these exchanges. (In the London Bullion Market most likely the largest volumes are traded, but because this is an OTC market that doesn't disclose much data we can't use it in our West - East comparison.)

From now on I will publish the trading data of all three exchanges after every trading week to closely monitor if the gold market’s center of gravity is moving to Asia.

The largest precious metals futures exchange in the world is the COMEX located in the US. This exchange started trading silver futures in June 1963 and gold futures in December 1974. Futures are a derivative of an underlying asset, in this case precious metals, as they are traded on margin. Through futures traders can take on positions in precious metals but only deposit a fraction, the margin, of the total cash value in advance. This provides leverage; price movement is magnified relative to the margin on deposit. Futures can be used, for example, to hedge or speculate. Historically the COMEX has been the dominant futures exchange in the world and plays a significant role in the pricing of precious metals.

The first steps in the opening of the Chinese precious metals market were made in 2000 with the launch of the Shanghai Huatong Nonferrous Metal Wholesale Marketplace. This was the first time silver could be traded in the Chinese wholesale market, in previous decades the PBOC had the monopoly in gold and silver trade in China. In 2003 the Shanghai Huatong Nonferrous Metal Wholesale Marketplace was renamed as the Shanghai White Platinum & Silver Exchange (WPSE). In the years that followed the PBOC allowed silver to be traded on several other exchanges and among Chinese citizens.

In October 2002 the first Chinese gold exchange opened its doors; the Shanghai Gold Exchange. The SGE was designated as the core of the Chinese physical gold market. The PBOC decided all imported and domestically mined gold was required to be sold first through the SGE, additionally gold bars withdrawn from the SGE vaults were not allowed to return to the SGE vaults before being melted and assayed again. By this single entrance point the PBOC can easily monitor the quantity and quality of the gold that enters the Chinese market place and is being added to private reserves. Of course the Chinese gold market didn't liberalize overnight, only in 2007 did the SGE exactly operated as intended.

In its early years the SGE was dwarfed by the COMEX, in the first trading week only 398 Kg's in gold spot contracts were traded, during the same week 476 tonnes in gold futures were traded on the COMEX. But the Chinese were assiduous to develop their precious metals markets in order to become a global player as they were fully aware of gold's importance in the monetary system. The goals of the Chinese government were to stimulate its citizens to accumulate physical gold, developed derivatives to improve the market's infrastructure and the Chinese gold market needed to internationalize as part of the development of the Chinese financial markets and the internationalization of the renminbi. Next to the goal of the PBOC to accumulate gold. Zhou Xiaochuan, governor of the PBOC from 2002 till present, said at the LBMA conference in 2004.

China’s gold market should gradually realize three transformations: from commodity trade to financial product trade, from spot transactions to futures transactions, and from a domestic market to integration with the international market.

From the perspective of the central bank, the development and improvement of the gold market will facilitate the improvement of regulating instruments for monetary policy and macro adjustment system … gold still bears the marked nature of money under the modern financial system.

In the first two years after its inception SGE trading volumes only slightly increased, until the SGE added derivatives to their existing spot products. Au(T+D), which is a gold spot deferred contract (comparable to futures), was launched in September 2004 and Ag(T+D), a silver spot deferred contract, in November 2006. Gold trading volumes instantly increased by the launch of Au(T+D) and other product improvements. 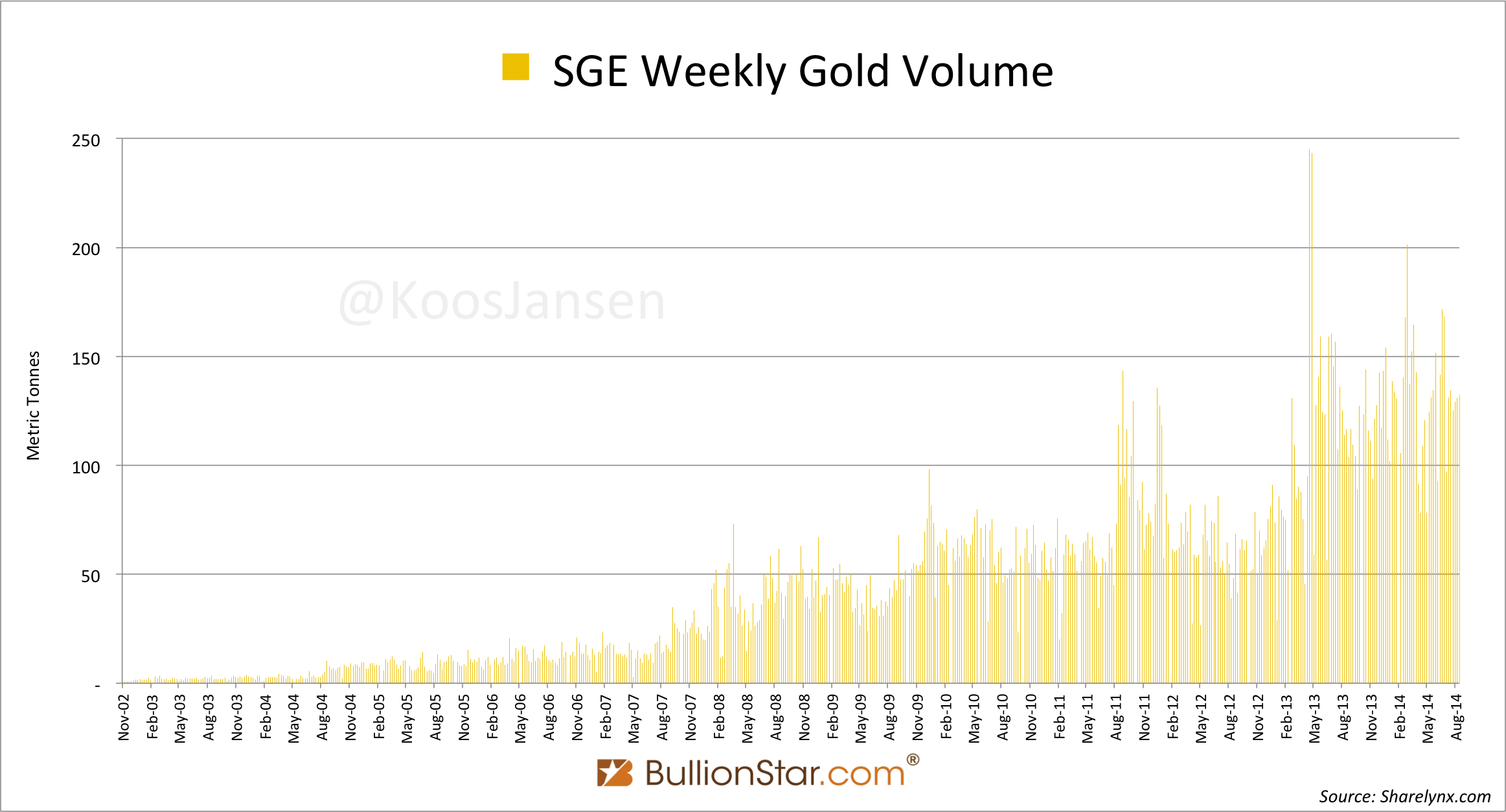 Eventually SGE trading volumes in both metals increased significantly, yet remained minuscule compared to the COMEX, that in 2013 on average traded 2,822 tonnes of gold and 43,097 tonnes of silver per week. Compare the COMEX weekly average volumes with the weekly volumes seen in the SGE charts above.

To further improve the infrastructure of the precious metals market (and to become a more serious opponent to western markets) the Chinese government launched gold futures (January 9, 2008) and silver futures (May 10, 2012) on the SHFE. Additionally the SHFE started the Continues Trading Program, or Night Trading, in July 2013 to facilitate trading during hours the financial markets in the US are active.

Though total Chinese gold trading is not even close to the volumes on the COMEX.. 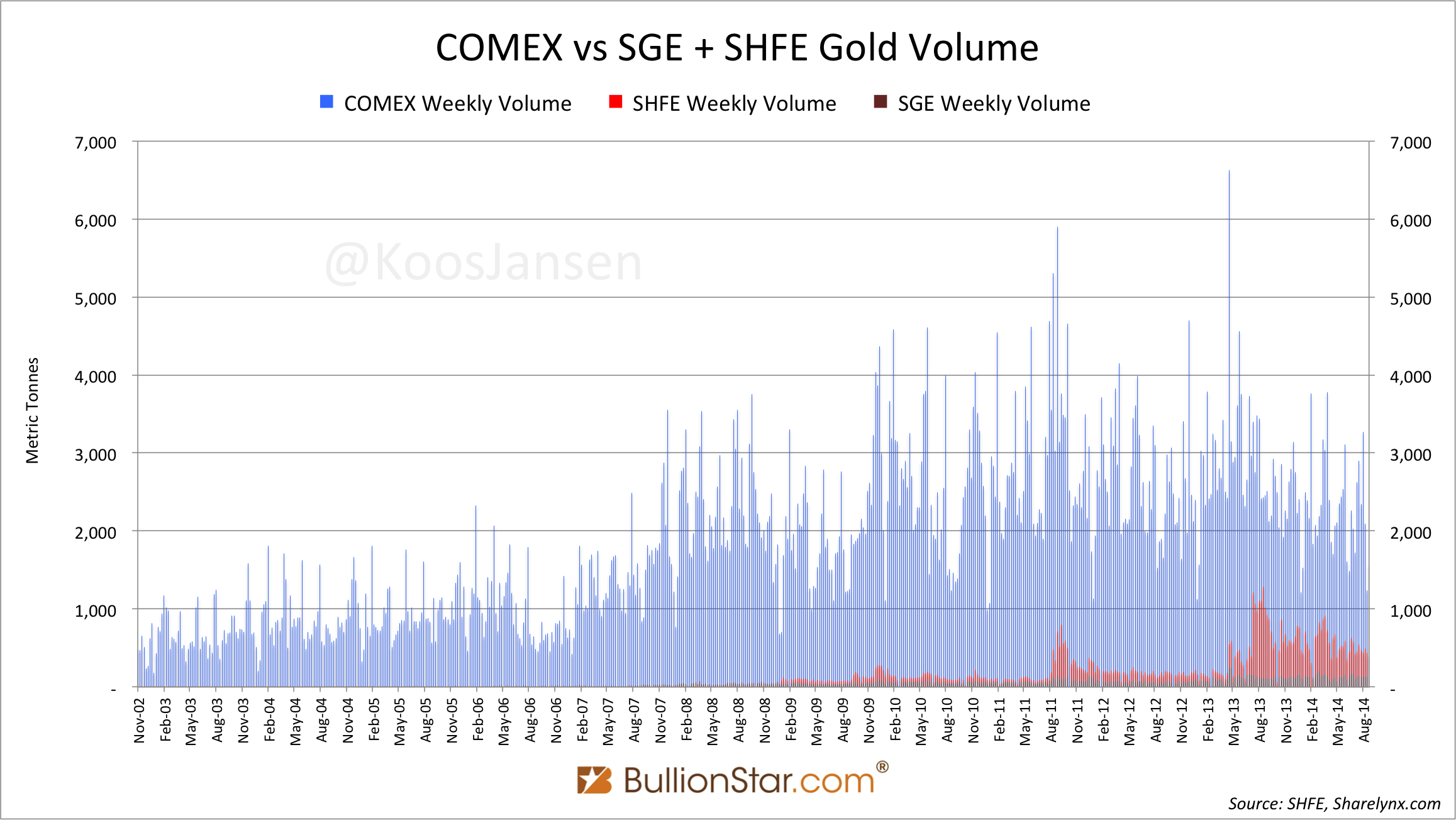 ..Chinese silver trading, on the other hand, has already transcended COMEX volumes. Sources familiar with the matter said the SHFE has plans to allow foreign traders to participate on their exchange, just like the SGE. According to multiple sources the difference in silver trading volume between the COMEX and the SHFE was larger than 15 % in 2013, which is false. The next screen shot is from the Silver Institute, World Silver Survey 2014: 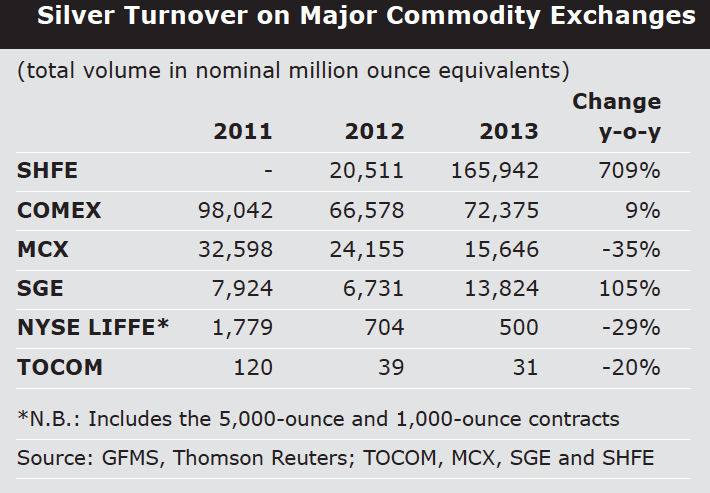 From the COMEX by email:

To compare SGE & SHFE numbers to COMEX one has to divide the Chinese numbers by 2, only then are all the numbers single-sided.

The SGE international board will operate in the Shanghai Free Trade Zone (FTZ), which in terms of trade can be seen as a separate country from China mainland. This is how I think the international board will operate: A foreign trader buying 100 Au9999 spot contracts on the SGE international board (SGEIB) will see his SGE gold account being credited by 100 Kg's and his SGE renminbi account being debited by the corresponding cash value. This does not mean he imported gold into the mainland; he became the owner of 100 Kg's of physical gold in the Shanghai FTZ and has the option to ship his metal home (not the mainland) if he wishes. Vice versa, a foreign seller can ship gold into the FTZ, the SGE staff will inspect it and if approved the gold will be moved into the SGE vaults. Again, no gold is imported into the mainland. If this gold is sold the seller’s SGE cash account is credited and his gold account is debited.

The SGEIB will attract trading activity and promotes the internationalization of the renminbi. It will not be a vehicle for, i.e., Germans to buy gold from Chinese citizens, the PBOC will retain its policy of very little gold export (a few jewelers have an export license). The SGEIB will facilitate off shore gold trading in renminbi, it will not open the Chinese physical gold market to the rest of the world.

The SGEIB will start by launching three spot contracts, which will facilitate physical gold trading. In terms of volume the spot contracts will not challenge the COMEX, but the SGE has stated derivatives will follow. A trend worth to watch.