Headlines are easy to write, a bit of sensation in it and they will surely persuade people to read the accompanying article. Though I'm often disappointed to read articles that contain remarkably little of what the headline promises. On the other hand, I personally have written many articles that were read by few because my headline wasn't catchy enough in a stream of apocalyptic headers readers a daily thronged upon. I call this the headline problem; no catchy headline, no readers. This might create an incentive for writers to exaggerate a headline just to get their message across. The next step is to sensationalize a headline and the content to go with it to attract even more readers - though this approach has little to do with journalism. Surprisingly, Bloomberg used this approach on June 23, 2014, when they published this article:

Germany has decided its gold is safe in American hands.

The headline and story suggest that the German gold repatriation schedule - to ship home 300 tonnes of gold from the US and 374 tonnes from France by 2020, in order to have half (1695.3 tonnes) of Germans official gold reserves stored in Frankfurt - will be halted as German politicians decided their gold "is safe in American hands".  The headline and content that comes with it are misleading in every sense of how you look at it. The first Paragraph states:

Surging mistrust of the euro during Europe’s debt crisis fed a campaign to bring Germany’s entire $141 billion gold reserve home from New York and London. Now, after politics shifted in Chancellor Angela Merkel’s coalition, the government has concluded that stashing half its bullion abroad is prudent after all.

At the time the article was written 32.1 % of German sovereign gold reserves were stored in Frankfurt. So, if the government "has concluded that stashing half its bullion abroad is prudent after all", it would still require 607.214 tonnes to be shipped to Germany in order to have 50 % on German soil. Though the article suggests there will be no more shipments of German gold from the US, which is incorrect as we will see later on.

At the end of the article it's stated:

“Right now, our campaign is on hold,” Peter Boehringer, a Munich-based euro critics who co-founded an initiative to bring home all of Germany’s gold in 2012, said in an interview.

Again, incorrect. After Bloomberg published the story Peter Boehringer promptly responded in the comment section beneath the article (click here to directly read his comment) to ?painstakingly explain all the inaccuracies that the Bloomberg story contains - no need for me to repaet him.

Alas, the Bloomberg story has reached many which are still under the assumption Germany has stopped repatriating its gold from the US and France. To get official confirmation on the continuation of Germany's gold repatriation I asked the BuBa's press department a few questions in August, their answers were very clear. The next screen shot should clarify all: This is the link to the interview with Thiele from February 19, 2014.

The German gold in New York is stored at the Federal Reserve Bank Of New York (FRBNY), that recently reported 24 tonnes of gold had left their vaults in July 2014. The FRBNY stores gold, free of charge, for 36 sovereign nations and the IMF?. All these accounts are confidential so we don't know who is withdrawing gold if total inventory is dropping. However, as we can read from the interview with Carl-Ludwig Thiele, Member of the Executive Board of the BuBa, 5 tonnes were repatriated from the FRBNY in 2013. Let's have a look at data of the FRBNY foreign gold deposits of the last two years. 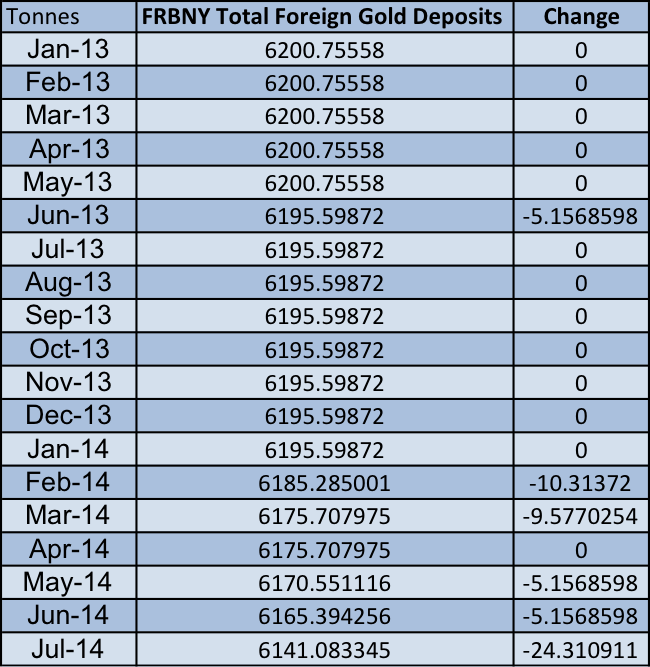 We can clearly see 5 tonnes had left the FRBNY vaults in 2013, it's certain this was withdrawn by Germany. Subsequently, the repatriation schedule continued and, therefore, it's very likely the withdrawals in 2014, in total 54.5 tonnes, have been also transferred to Germany. Although I'm not positive, it's my assumption the German gold repatriation is accelerating.