We are living in unprecedented times. The number of new records set for the wrong reasons in the global economy are increasing more and more each day. In this article we review some of them to illustrate just how wrong things have become and the dangers the current environment pose to the man on the street.

Amount of base currency created

The chart below shows that this is the first time in the last 100 years that the US base money has been created this much and this fast! 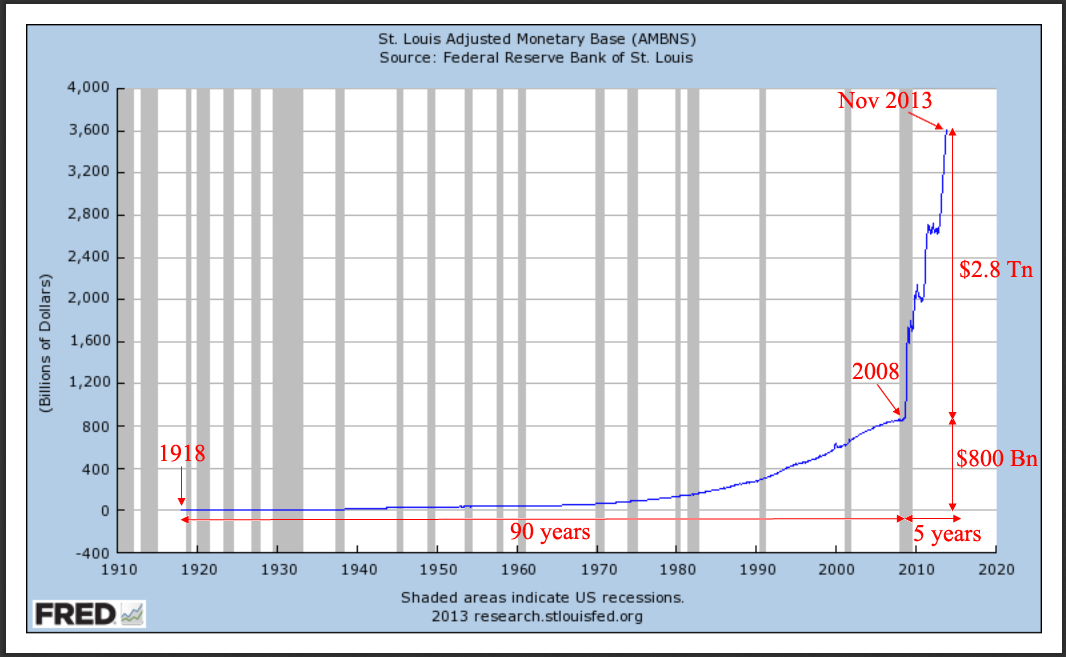 Looking at the chart, it took 90 years for the US base money supply to reach about $800 billion. Less than 12 weeks after Lehman Brothers collapsed in September 2008, the Federal Reserve created another $800 billion effectively doubling the money supply. This accounted for the sharp near 90 degrees surge in the chart in 2008. What took 90 years to achieve was suddenly achieved in under 3 months! Fast forward to 2013, the base money supply has crossed $3.6 trillion – it has more than quadrupled within 5 years. It is no wonder the chart looks broken. Clearly, something is very wrong.

This rapid expansion of the base money is inflationary. It means that a tremendous amount of currency has been printed or created digitally with a short span of time. If this flood of currency leaks into the economy chasing after the pool of goods and services that have relatively unchanged supply, the purchasing power of that currency will fall dramatically. One will need more units of the currency to buy the same amount of goods and services.

At the homepage of the Federal Reserve Bank of Minneapolis, there is a section that says ‘What is a dollar worth?’ Try entering the following:

Click on ‘Calculate’ and the figure that appears should be close to $1. It shows that what had cost 4 cents in 1913 will now cost a unit of the present day dollar. 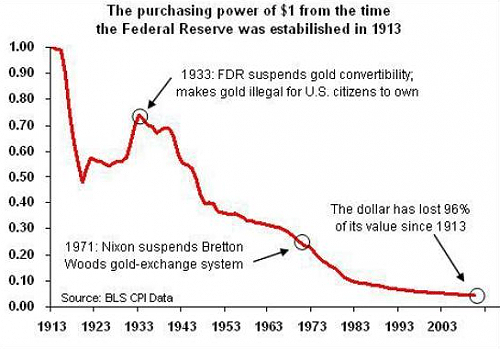 Anyway, who saves and put money in the bank these days? Interest rates paid on savings are at record lows. This is part of the nature of the low interest rate environment that we are at this moment – the discouragement of savings and the push for people to take on higher risks in higher yielding investments. Central bankers are favouring low interest rates to discourage savings in their bid to get people to spend the money in the economy to energise it.

All major central banks are printing money without limits

This suppression of interest rates is largely due to the US Federal Reserve’s Quantitative Easing (QE) program which was matched by the similar money printing programs of the Bank of England, European Central Bank and Bank of Japan. The current round of the Fed’s QE has no end date. The ECB has its own unlimited stimulus program called Outright Monetary Transactions (OMT). The Japanese are determined to double the money supply to create inflation. The Bank of England’s stimulus program has totaled £375 billion since 2009 – nearly eight times the original estimate required when it first started.

While central banks may acknowledge that such stimulus programs cannot go on forever, their continued money printing is supported by government generated data which shows that there is insufficient inflation. An example is the recent interest rate cut by the ECB. This is despite the already gigantic amount of currencies that have been created by these central banks and increasing price inflation in the goods and services around us.

The records mentioned above are only a handful of data that show the rapid increase of debt and money printing happening right now. Many of it has surpassed long term historic numbers. They point to the growing decay in the fundamentals of the global economy impaired by excessive money printing.  It is really a tough sell for central bankers and mainstream economists to allay the fears of the populace by saying that the situation is under control given the outrageous data and events that we continue to see. The problems brought about by the financial crisis of 2008 still haunts the global economy today despite central banks efforts to print money and cut interest rates. Should the central banks continue on their present course, we will no doubt witness more records set in economic numbers - all for the wrong reasons.