Whilst western media are still under the assumption Chinese gold demand is declining, based on data from the World Gold Council and net gold export from Hong Kong to China mainland, in reality demand is extremely strong. As I've previously written, the lower the price of gold will go the more physical gold will be purchased by the Chinese people, and the price of gold has been dropping since mid August. 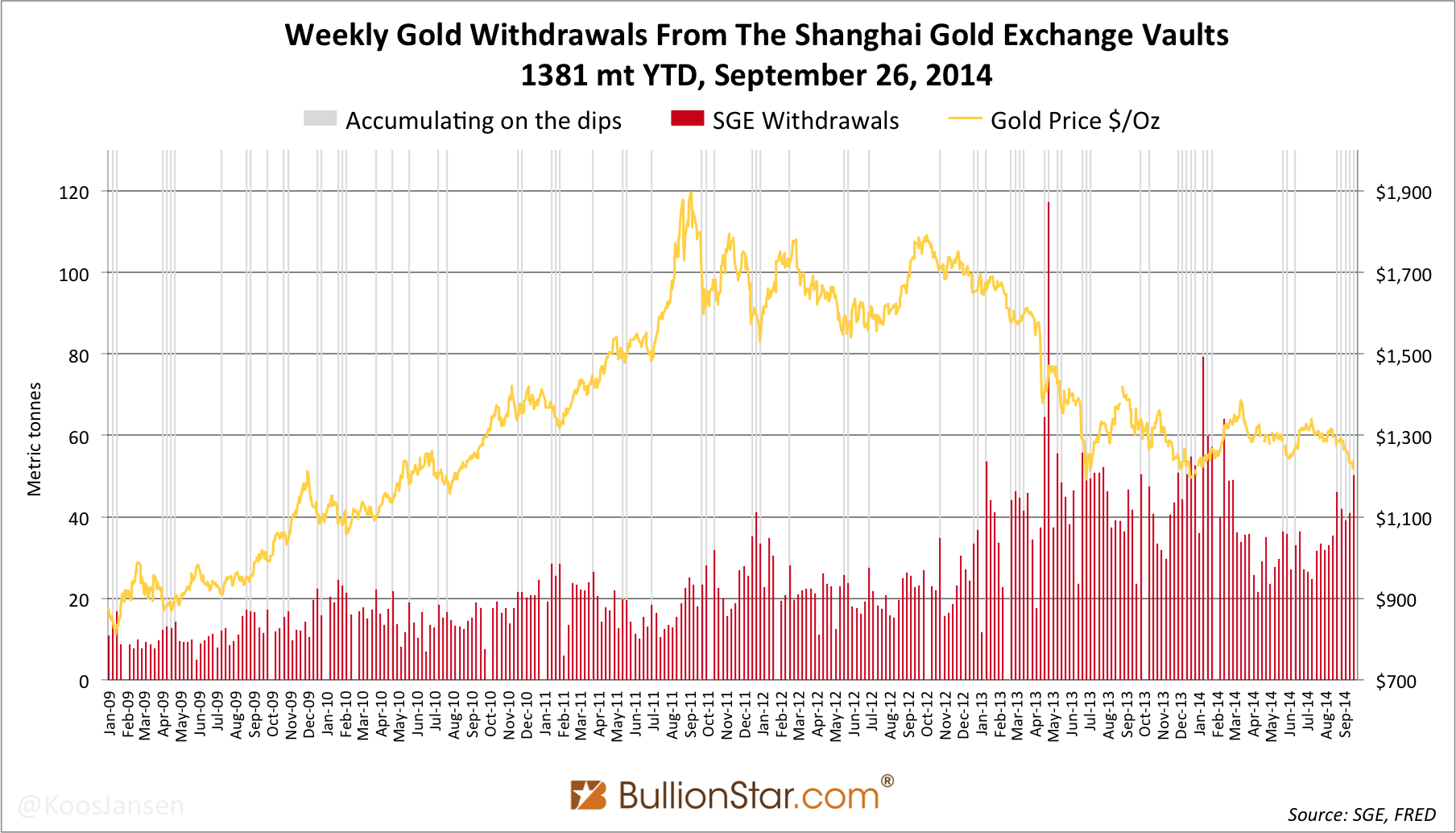 Because the SGE International Board started trading on September 18, I checked with the SGE if the total withdrawal numbers from week 38 include withdrawals from the International Board (IB) vaults in the Shanghai Free Trade Zone (FTZ). Yes, it does they told me, though "withdrawals from the IB vaults are insignificant at this point", they added. The total gold volume traded on the IB was 122 Kg in week 38. It's impossible to know, but if all buyers opted for withdrawal, we would have to revise total weekly withdrawals in the mainland to 50.1 tonnes.

Needless to say I kindly requested if the SGE could disclose withdrawal numbers from the Main Board (in the mainland) and International Board (in the Shanghai FTZ) separately henceforth.

Elevated withdrawals in the past few weeks have coincided with higher imports (that circumvented Hong Kong). The next quote is from Reuters:

The physical volumes have been high this month [September] compared to August. I would say imports could be at least 30 percent higher than last month," said a trader with one of the 15 importing banks in China.

Another trader said imports will remain elevated all through the fourth quarter due to seasonal demand.

30 % higher imports in September compared to August are reflected in SGE withdrawals in the chart above.

Exactly one year ago I wrote my first analysis about the structure of the Chinese gold market and the relationship between Chinese wholesale demand and withdrawals from the SGE vaults. Since then this understanding, strengthened by more research and proof, has gradually spread through the gold space (thanks to Jan Skoyles, Willem Middelkoop, Chris Powell, Torgny Persson and many others). Additionally it has been noticed below the surface by investors, banks, and hedge funds world wide; often I get inquiries from professionals of all corners of the financial industry regarding the Chinese gold market. There is no doubt in my mind the true numbers on Chinese gold demand will eventually reach the mainstream media. A small preview was published on September 25 by CNC Asset Management; distributed by Scotiabank: 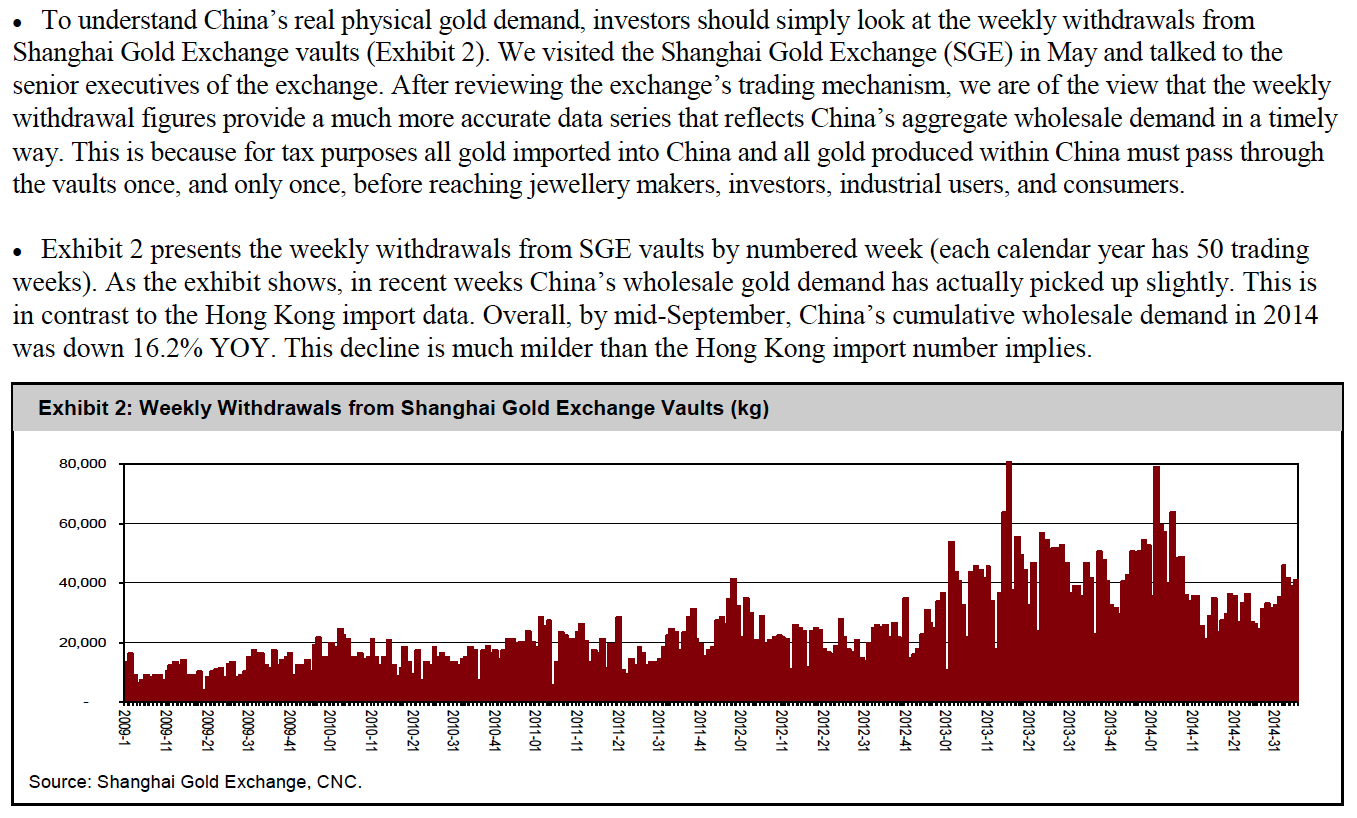 Let's fast forward one week (withdrawal data always lags one week). The price of silver in London has dropped to $17.65 an ounce on Friday September 26 from $17.83 on Monday September 22. Remarkably the discount of Shanghai silver has stabilized over this period instead of declining. The trend has been a declining discount of silver in Shanghai (relative to London) when the silver price lowers, and vice versa. That trend seems to have been broken now. The discount of Shanghai silver - excluding 17 % VAT - closed at 4.8 % relative to London spot. 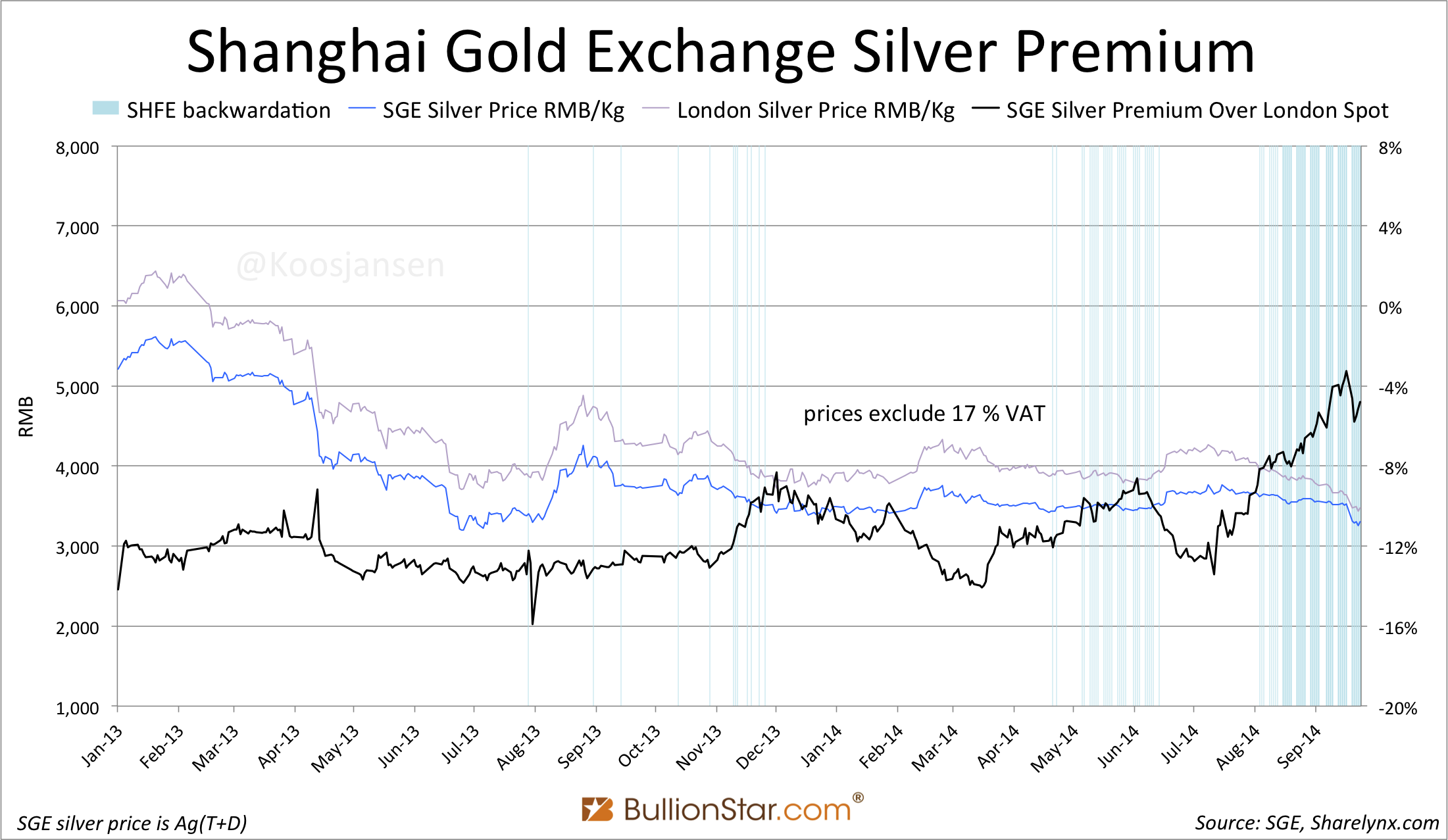 Silver on the Shanghai Futures Exchange (SHFE) remained in backwardation throughout the past week. Ag futures on the SHFE have been trading in backwardation for 37 days in a row (since August 6).

Silver inventory on the SHFE has dropped 9 % w/w, to 81 tonnes, the last data we have from the SGE is they hold 67 tonnes of silver inventory. I would like to stress that most physical silver in Shanghai is not traded over the SHFE or SGE but through the Shanghai White Platinum & Silver Exchange (WPSE). The SHFE and SGE are more for hedging and speculation. 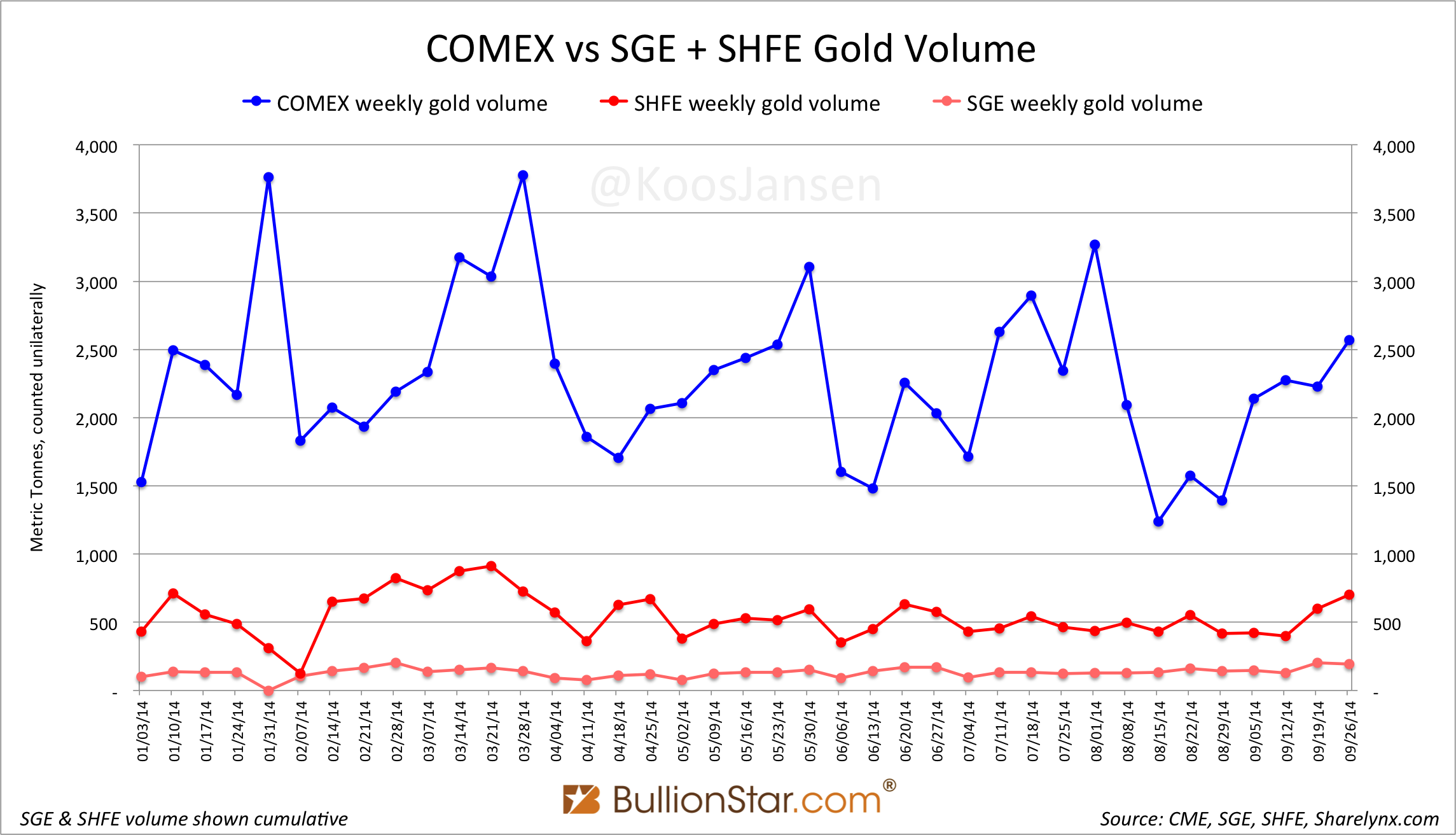 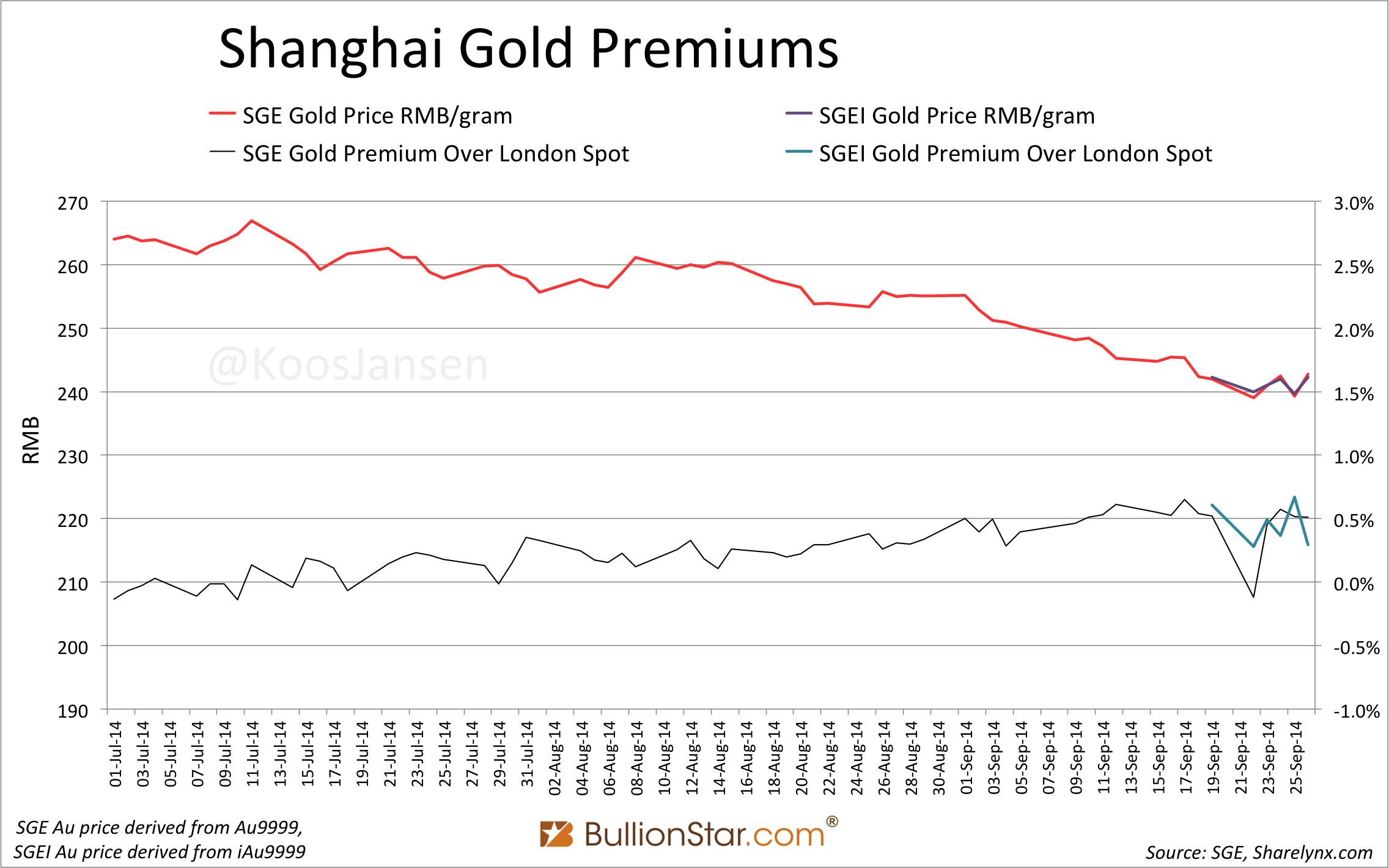