Robust Chinese gold demand is keeping up its pace. Chinese wholesale demand, measured by withdrawals from the Shanghai Gold Exchange vaults, was 39 tonnes in week 36 (September 1 - 5). Year to to date 1290 tonnes has been withdrawn from the SGE vaults.

The price of gold is in a down trend since August 12, causing the premium of gold on the SGE to increase. The Chinese are always trying to buy the dips; whenever gold goes down they buy, accumulating at the lowest prices. We can not only see this by SGE premiums moving inversed from the price of gold, but also from SGE withdrawals. The next chart shows the price of the SGE spot contract Au9999 combined with its premium over London spot. Note the inversed correlation between the red and the black line. 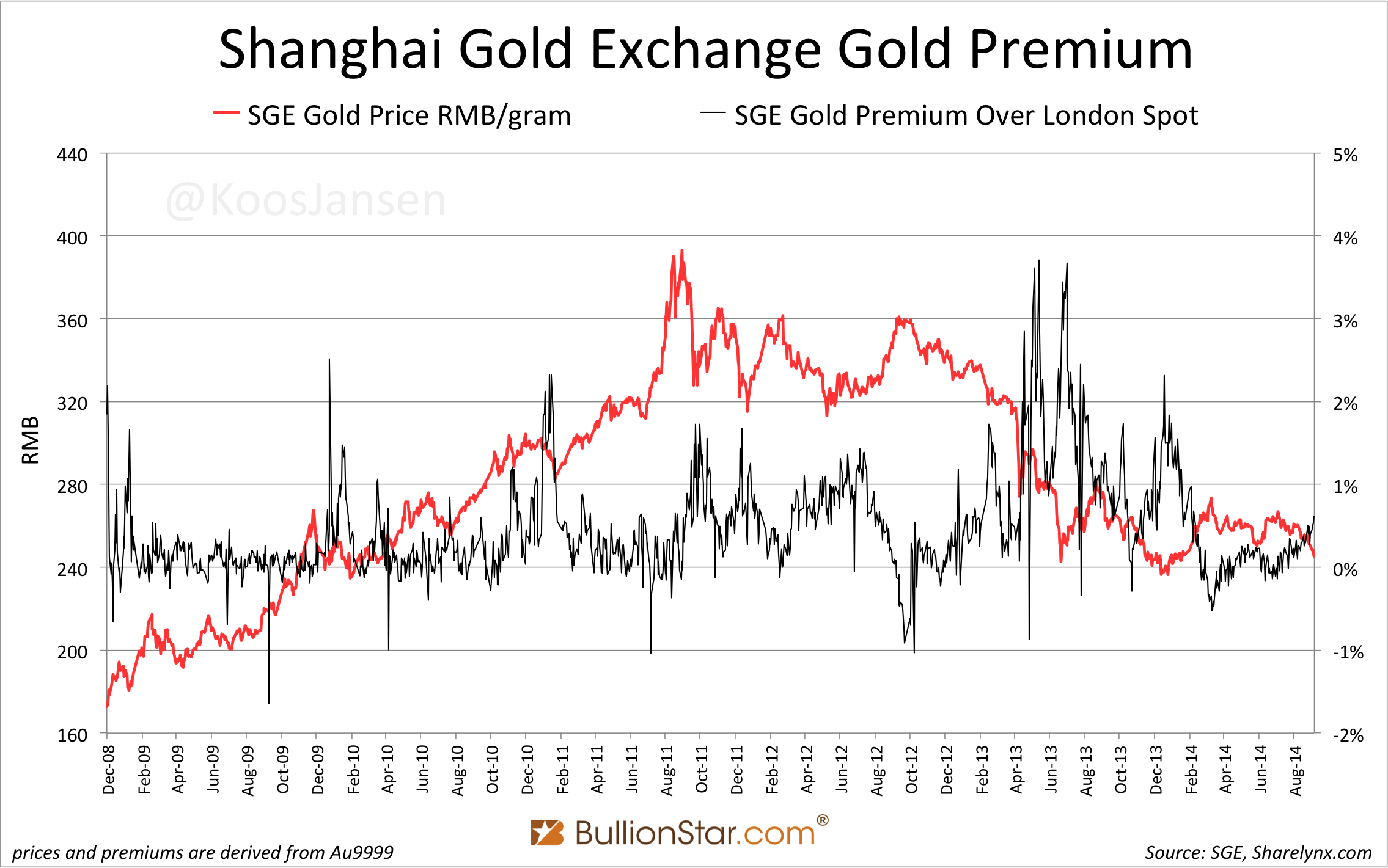 Comparing the direction of the price of gold and SGE withdrawals in one chart is less scientific as withdrawals do not coincide with the purchase of physical gold. On the SGE one is not required to withdrawal when gold is bought. Yet, we're able to perceive elevated withdrawals on the dips.

When gold is withdrawn from the vaults it's not allowed to re-enter before melted and assayed again. Speculators are likely to keep their gold in their SGE account to be able to short at a later stage. The ones that do withdrawal are not speculators, they choose to withdrawal and hold their gold for the long term. It must be noted most participants on the SGE are not speculators, but jewelers and banks purchasing inventory, institutional investors or personal SGE account holders. In the next chart I've highlighted peaks in withdrawals, relative to their respective period, that coincided with dips. A few weeks of data is missing from the SGE reports, normally I skip those weeks but for this chart I didn't as it would distort the progression of the price of gold.

It's clear the Chinese step up accumulating gold when the price drops - next to the trend of rising demand over the years and seasonal buying around new year.

Publication of SGE withdrawals always lags one week; how the Chinese reacted to the latest lows of $1,229 per ounce (September 12) is not reflected in the last chart. However, given SGE premiums are slowly rising for a few weeks - this data does not lag - I expect withdrawals in week 37 (September 8 - 12) to be as strong as the three weeks prior.

Let's move on to silver, which is still - since August 6 - trading in backwardation on the Shanghai Futures Exchange (SHFE). And not just the second future month, ALL future months are trading at lower prices than the front month (though volume was zero for most months on September 12). 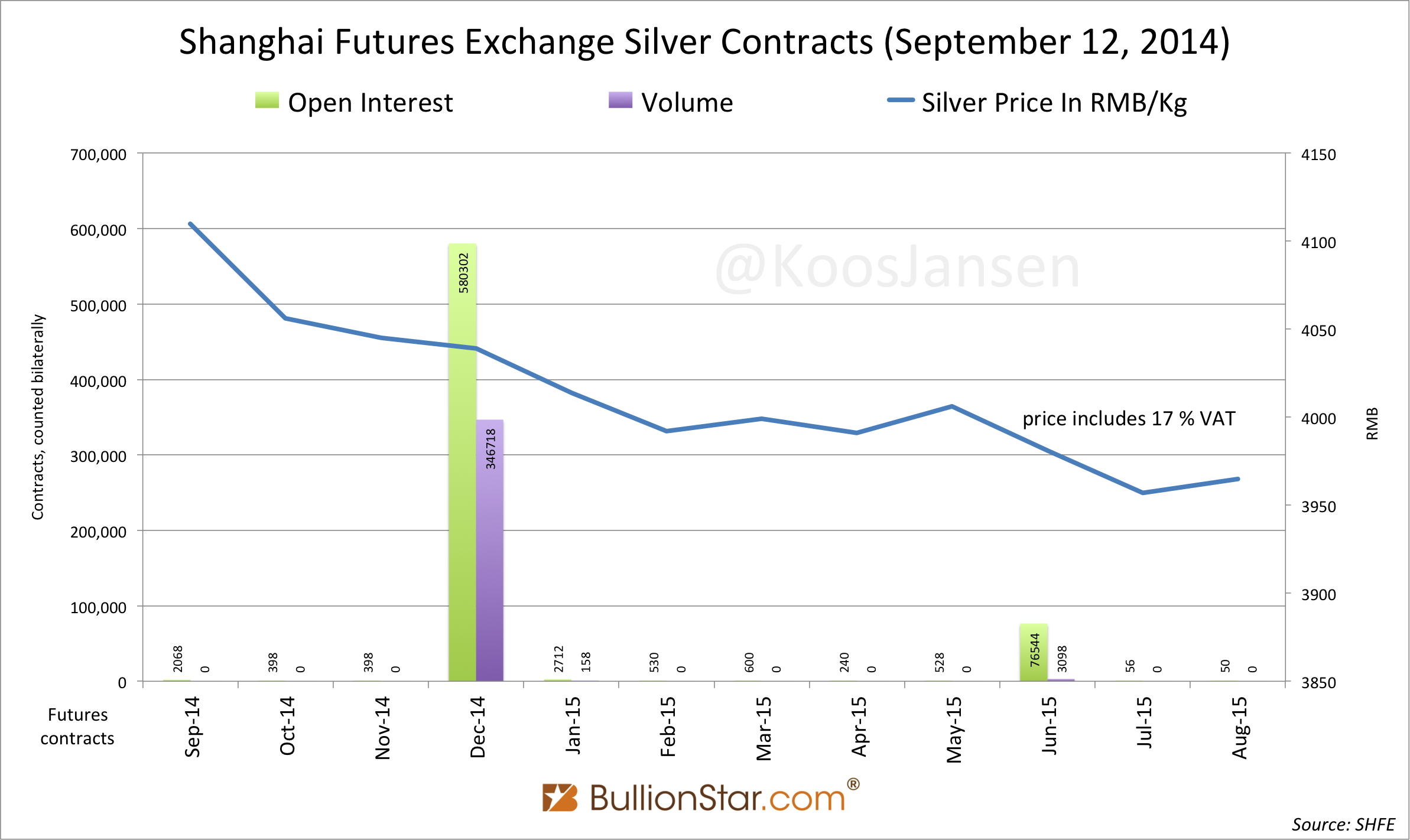 Silver prices on all Chinese commodity exchanges are quoted including 17 % VAT. 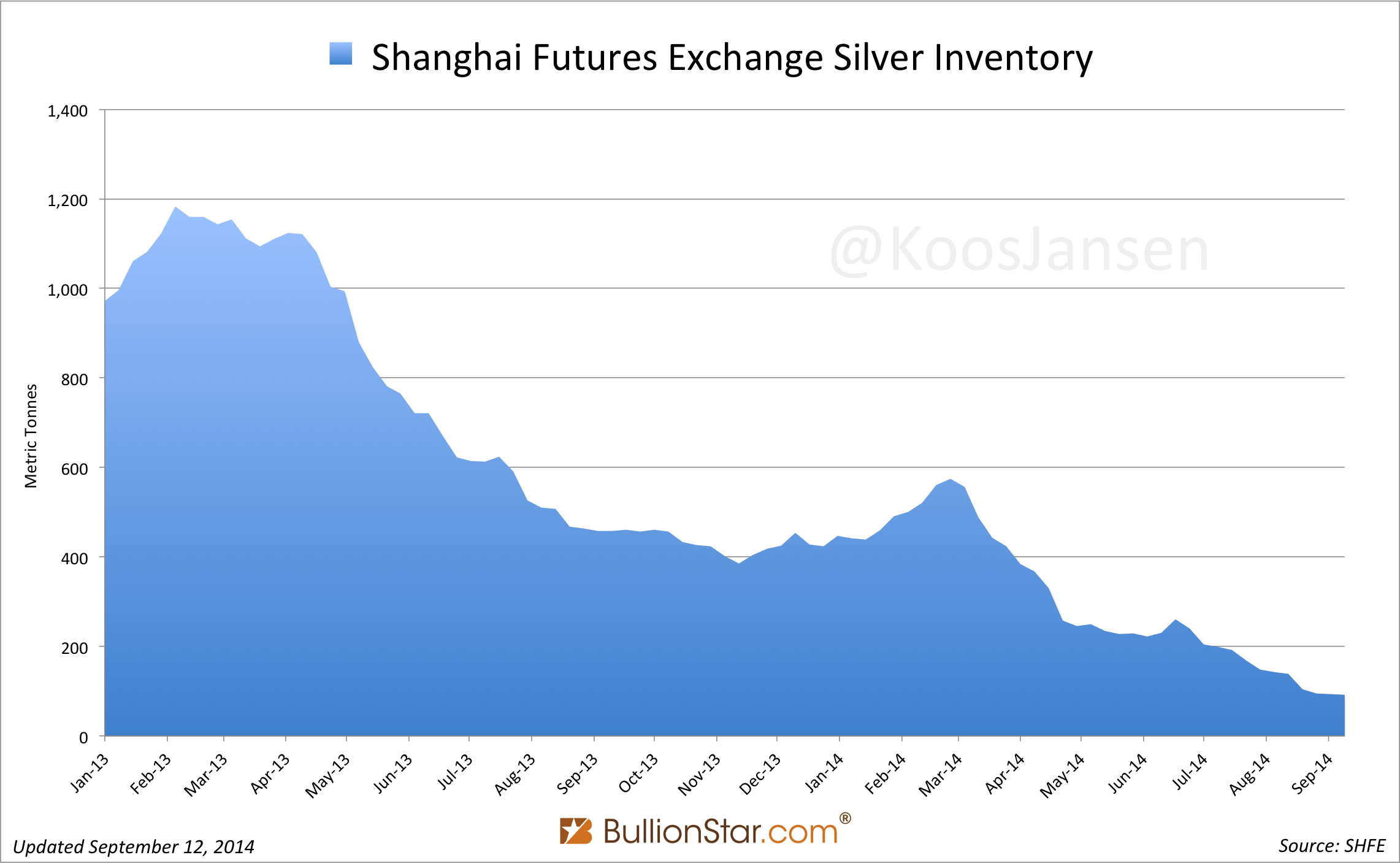 Silver in Shanghai is scarce, this has caused backwardation and smaller discounts of the spot price relative to London spot. The SHFE, however, is not going to default in my opinion - some silver investors are counting the days inventory will reach zero. Falling inventory is a cause of the futures curve. Currently the futures curve is in backwardation, when silver inventory was increasing in January 2013 the curve was in contango (future prices were higher than spot).

Depending on the price in the future, traders can cash and carry metal. A simplified example; a trader borrows funds at 4 % from a bank to buy spot silver at 6000 RMB/Kg. The silver is moved into the SHFE warehouse and sold through a futures contract one year from now for 6500 RMB/Kg. The profit would be 500 RMB/kg minus the interest for the bank and the cost to store the metal. The next chart shows the futures curve of silver on the SHFE at January 4, 2013. Because the futures curve has moved into backwardation in recent months the cash and carry opportunity has closed, this has caused inventory to drop.

If future prices fall they will cross a point, before backwardation is reached, at which the future price of silver is less than the spot price plus the cost to carry (store the metal) plus the interest and thus the cash and carry trade becomes unprofitable.

The current scarcity has diminished the gap between Chinese and London spot prices. If we subtract 17 % (VAT) from the SGE silver prices, the discount to London spot was 4 % on September 12. This is the smallest discount since September 2011, when the price of silver made a massive vertical slide. If the discount reaches zero and turns into a premium it would significantly stress world silver demand as China would increase import.